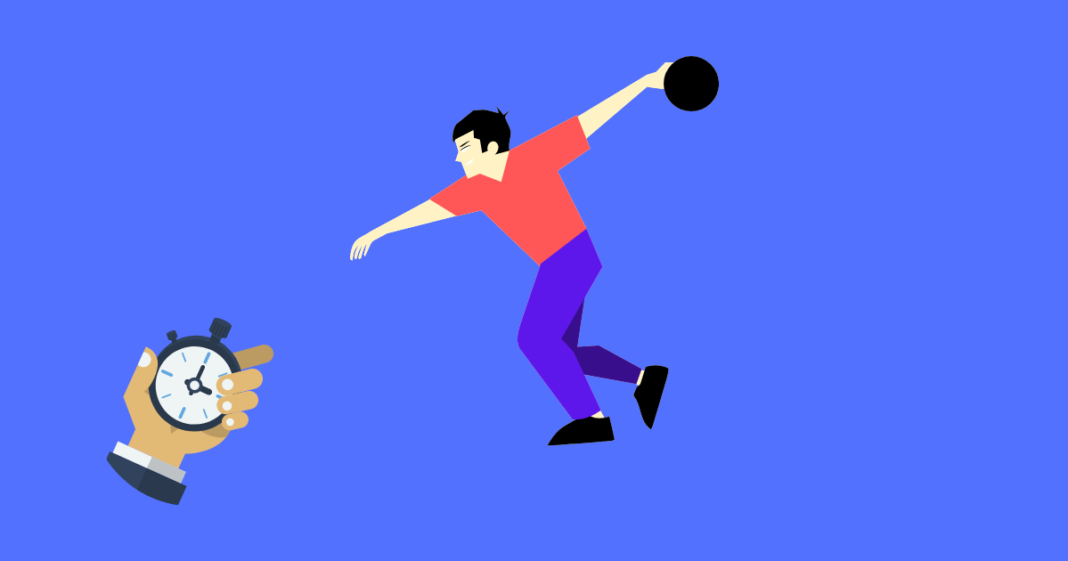 Bowling is one of the most famous indoor sports across the world. Completing a competitive bowling match doesn’t take too much time like other indoor sports or board games. But the main question is how long does a bowling game take?

Well, you can’t exactly say how many minutes would a bowler spend to finish a match. In general, it would take around 20 minutes or so for even a semi-pro player to complete all the rounds and finish a match.

But there are some catches. “The total time a bowling event needs” depends on how many players are participating and which type of players are they. Furthermore, the duration can also increase or decrease if the arena master adds some special rules to the match.

Understanding Bowling – Know About The Game!

This whole idea of the game is quite old. The concept was first seen in the Egyptian empire back in around 5000 bc. Back in that time, people used to make bowling balls with wheat or similar crops in leather covers tied with ropes. And the pins were good-looking similar stones.

After that, similar kinds of activities were seen in some European regions where knocking pins with balls was a part of catholic rituals.
The modern era of bowling started in the 16th century when the game was only legal for elites. Dukes and lords of the British empire used to play bowling in their backyards or personal restrooms for spending quality time with friends and families.

The Rules Of Bowling Game

We all know what should be the key motive of a bowler in a bowling game- score most by knocking the maximum amount of pins within not more than ten frames. But to make the game fair and square for each participant, there’re some rules internationally followed in tenpins, duckpins, nine-pins, and every other type of bowling game.

Although the number of pins, scoring, and bowling pin size differs from one type of bowling to another, the basics are all the same. Let’s show you the basics that every player needs to follow.

How Long Does A Game Of Bowling Take?

Bowling is a fun game If you have the skills and willingness to do better. But before learning the game, many newbies ask if the game takes too much time or not. When you calculate wisely, you can see that a game of bowling for one player takes around 15 minutes following the regulations even for a beginner.

Accurately speaking. A ten-pin game of bowling takes 20 to 30 minutes depending on the bowler’s skill level.

Let’s calculate the total timing. Both beginners and experts can take the run and roll the ball within 20 to 30 seconds. And a ball would take around 10 to 20 secs for crossing the lane and hitting pins. So, the total time required in a throw is less than a minute.

Now, the main difference comes. Usually, beginner-level players take some extra time for the next throw. They can’t quickly prepare themselves and recalculate their stance and approach without thinking a bit. So, we’d say a newbie might take a break of 30-40 seconds before going for the next throw.

But in the case of an expert, he or she doesn’t need that much stuff. The player completes a throw, then waits a few moments for the bowling ball to come. After that, the expert quickly comes right to the spot where the approach starts. All these things can take less than 15 seconds.

How Long Does A Round Of Bowling Take?

Just above, we’ve figured out every throw in bowling takes around 1-1.5 minutes. So, if there’s no inconvenience between throws, a frame or round might take 2 or 3 minutes.

How Long Does A Game Of Bowling Take Depending On the Numbers Of Players?

So, we mathematically know how much time a player might need to complete a match. But what if there is more than one participant in the match?

Though there are two throws in every frame or round, a bowler might not require two throws every time as he or she can score a strike in the very first throw. When this happens, an event can have a conclusion even before the estimated time.

Another reason for a match being quickly wrapped up is if the match officials understand there’s no need to complete 10 rounds, the winner is already decided by the scoresheet after a few rounds are finished.

Whatsoever, a bowler can get hurt or any lane can have some issues during a match. In those circumstances, arena managers might take some extra time to fix the issue and continue the game at its normal pace.

Keeping all these possibilities and theories apart, let’s give you some straight answers below.

How Long It Takes for 2 Players In A Game Of Bowling?

Bringing in the formula we’ve made above, a game of bowling for 2 players needs,

How Long It Takes for 3 Players In A Game Of Bowling?

How Long It Takes for 4 Players In A Game Of Bowling?

How Long It Takes for 5 Players In A Game Of Bowling?

How Long It Takes for 6 Players In A Game Of Bowling?

Not every bowling match gets wrapped up within the estimated time. Sometimes, a few uncertain issues can also delay the result.

There are no fixed amount of uncertainties in the bowling game. For example, when more than one bowler shares the top score, game controllers host an extra round for breaking the tie. This frame can take some extra minutes. And even after the tie-breaker, when there’s no result, another extra frame happens, and so on.

Apart from that, you already know the more people participate, the lengthier the math becomes. That’s why a solo or duo match takes less time than a match of 4 or 6.

You can also assume a competition shared between newbies take more than the usual time. Rarely, amateurs can quickly score in professional events.

Last but not the least, oil patterns on the bowling lane can pace up or pace down the speed of a game. Short oil patterns with higher frictions on the lane make scoring tough. Players take time and put more effort into scoring under these conditions.

What Really Makes A Game Of Bowling Quicker?

The key reason why a game gets pacey and quick results is because of being less competitive. Low-competitive matches always become one-sided. In these situations, the best player with the most experience outscore opponents in a short time.

Hence, how long does a bowling game last in this kind of event? Approximately 5 minutes in a dual and less than 12 minutes in a 4-man battle.

Besides, if you’re a pro and bowl in long oil patterns, scoring and making strikes become easy. In many local bowling arenas, managers make a long pattern to let members score strikes more often and make the game more enjoyable.
You can’t determine how long does it take to bowl a game when scoring is a matter of jiffy for all members. But still, high-scoring match conditions give advantages to all players. Bowlers can score easily and create a conclusion.

Becoming a pro bowler is not all about mastering all the skills. It’s the bowling lane courtesies and etiquettes that turn a good bowler into a great bowler. Before wrapping up, we’ve thought why not discuss those courtesies?

Okay, no more new topics. It’s time close things up. We’ve tried to explain exactly how long a game of bowling takes along with all the relevant facts that matter when you’re calculating how much time it takes for 2 or 1 player.

In fine, let us remind you again, a player can take around 20-30 minutes to complete a tenpin match in any bowling lane. You can finish the game more quickly when you master the necessary skills to have perfect scores.

How Much Does It Cost to Drill A Bowling Ball?

No-Tap Bowling – Everything You Need to Know

Professional Bowler Salary – How Much Do They Actually Make?